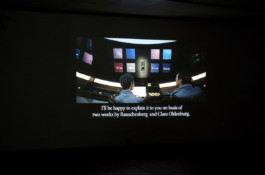 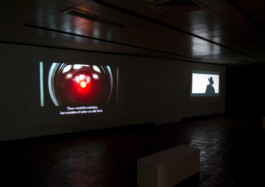 "The Conversation" is a post dubbing of several scenes cut together from Stanley Kubrick's 2001: A Space Odyssey.

To create gravity in outer space, the vast space station Discovery One revolves on its own axis, just as the voyage through infinite space moves in circles, forever and unnoticed. The protagonists are caught in an argumentative loop, unable to solve the question. The computer Hal 9000, a supposedly omniscient artificial intelligence, tries to give the answer to the astronauts, but a solution seems impossible. Again and again, the discussion ends up at the beginning. The two male astronauts with the same female voice represents humanity's insatiable quest for knowledge. The dialogue is inspired by Arthur C. Danto's essay The artworld. Like Danto, Hal tries to explain the art-question with beds, contructed by Claes Oldenburg and Robert Rauschenberg. He argues that if someone used these artworks as actual beds, they would loose their artistic claim. Thus anyone who deems the beds as a sleeping place misunderstands their meaning. The endless conversation is juxtaposed with Danto's argument that the constantly self expanding art theory must necessarily always include new "things" into the art world, which furthermore is the condition for the existence of art. According to Danto any shift in context, would mean a new piece of art. As a result the universe of art would be filled more and more with an endless amount of art entities to discover, whereas possible interpretations are drifting further and further apart.